Top 10 Surprising Things to Do in Strasbourg, France

Situated on the border of France and Germany, Strasbourg is a quaint town that blends both the German and French influences perfectly. With the picture-perfect timber-framed houses to the French and German cuisine, Strasbourg is a town that has built itself up through conflict to the lovely city that is a joy to explore. In 1988, the historic city center became the first entire city center to be designated as a UNESCO World Heritage site. And as the capital of the Alsace region in France, it is also the formal seat for the European Parliament. There is so much to see in Strasbourg that you might need a few days to experience it all. Here are the top ten surprising things to do in Strasbourg, France.

Walking around a city, you can get a good sense of what the town is known for and a feeling of its character. Whether it is the architecture of the buildings, art, statues, or the locals, immersing yourself in a new town is a great way to become a part of it. I usually start by taking a walking tour, but in Strasbourg, my friend Michelle, her family, and I played it by ear and just wandered around. We didn’t know where we were going or have any specific plan, which led us to many exciting things.

The vintage double-decker carousel at Place Gutenberg was a beautiful surprise to find in one of the town squares. Although there is a lot of traffic around the carousel with the car park and train going by it. Another interesting find is the man playing music from old-fashioned cards feeding into the machine by the Strasbourg Cathedral. Check out the building by the Cathedral that looks to have bottles for the window glass. And when you are hunting for souvenirs, check out the white storks of Alsace. These storks are symbols of happiness and faithfulness and bring fertility and good luck. Alsace has been working on a repopulation program for the storks, and you might see them nesting on chimneys and rooftops, or in trees. It is like stepping back into time while exploring Strasbourg. 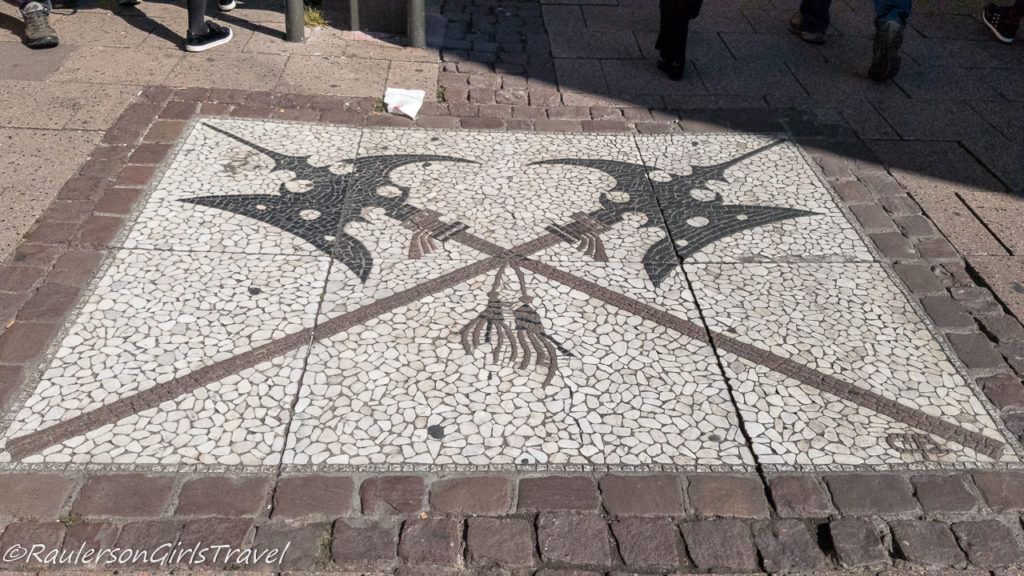 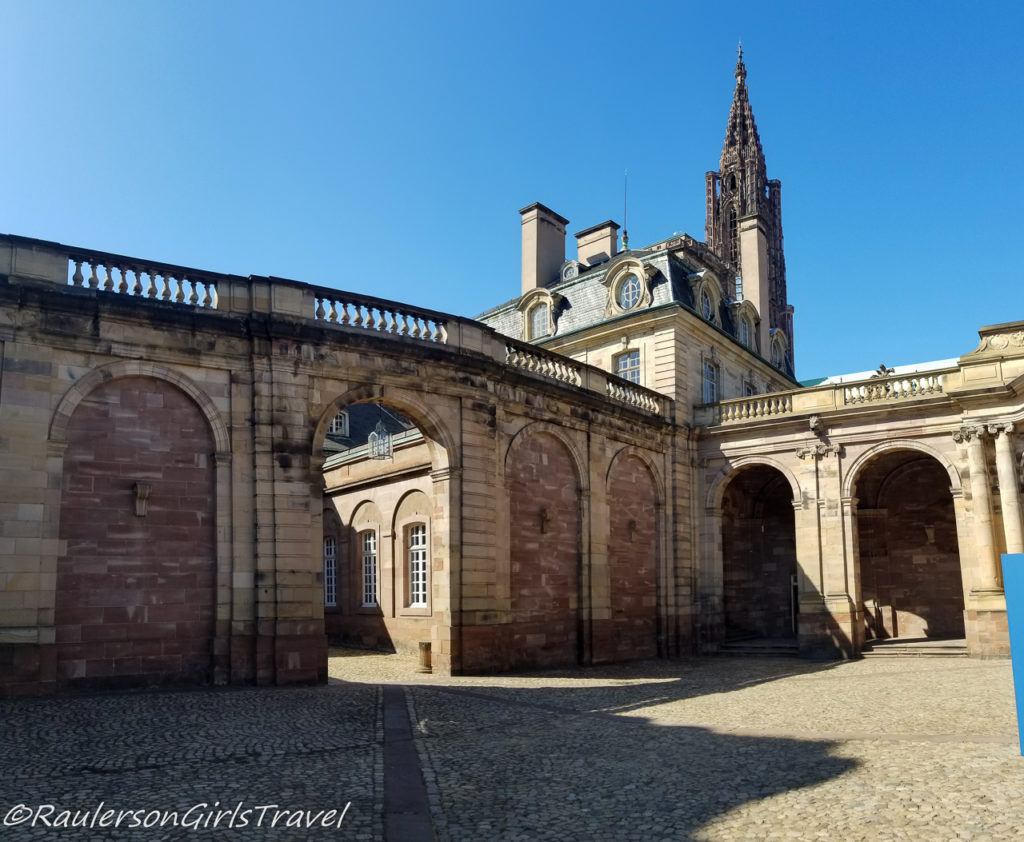 The Barrage Vauban bridge has been a cornerstone of the city’s defenses from the 1600s to the 1870s. It was an engineering marvel when, in times of conflict, it would raise the level of the Ill river and flood the lands south of the bridge. It would also drop barriers to prevent intruders from going through the bridge. Quite the medieval booby trap system. Today you can go to the roof to get wonderful views of the Ponts Couverts and Petite France. Admission is free, and the open hours are 9 a.m. to 7:30 p.m. And at night, you might see the bridge lit up with colorful lights that reflect in the water.

Walk Across the Ponts Couverts

The Ponts Couverts are three fortified bridges with four large square towers built in the 1300s. The bridges cross the four channels of the River Ill that flow through the historic Petite-France quarter in Strasbourg. Each of the bridges used to have a wooden roof to help defend the town, but it was removed back in 1764. Ponts Couverts actually means covered bridges.

Exploring the Streets and Canals of Petite France 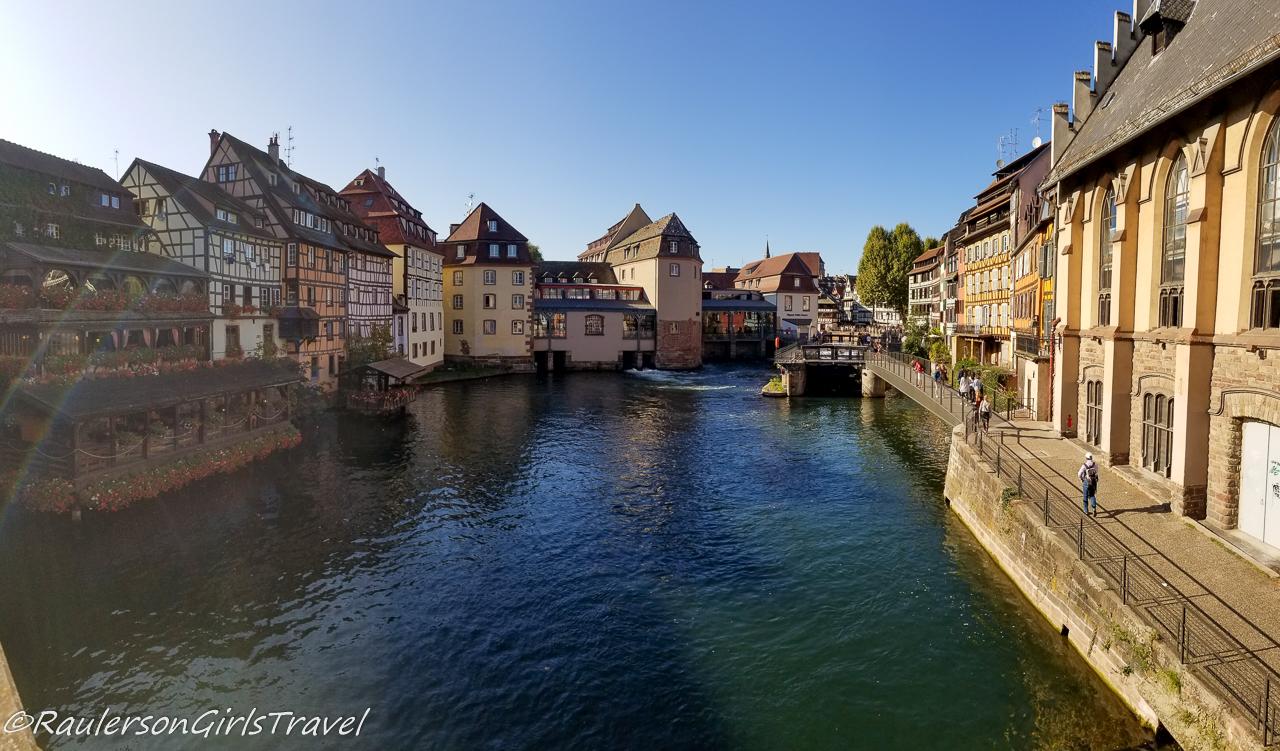 Petite-France is the highlight for me when visiting Strasbourg. The goal was to see all the timber-framed houses, and it lived up to my expectations. I took so many photographs of these beautiful historic buildings. I could have easily spent a couple of days walking up and down every single street to make sure I didn’t miss anything. But, as I only had one day to explore, I made the most of it. I walked almost 26,000 steps this day. What do you think? Was it worth it? I think it was and more! 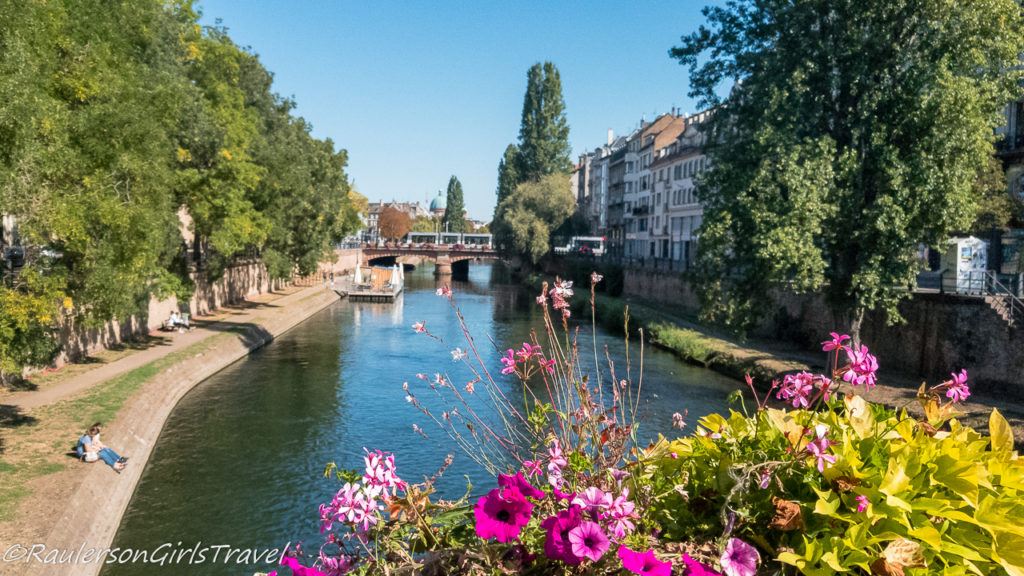 Explore Strasbourg in the Little Train

Take a ride in the Little Train and see all the Old Town quarters, Petite-France, Strasbourg Cathedral, all the quays and bridges, narrow lanes, and the wonderful architecture that makes up Strasbourg. Prices are 7€ for adults and 5€ for children for a 40-minute tour. The train runs from March to November and departs every 30 minutes by the Cathedral. During the day while I was exploring, I saw the train by the carousel, Cathedral, on one of the Pont Couverts bridges and a tiny lane where I was getting ice cream. This train is a great way to see the entire city if you don’t want to walk.

Another way to explore the city of Strasbourg is to take a river barge cruise along the canals. You will get a relaxing view of the timber-framed houses in Petite-France along the River Ill. And you will be able to experience going through the locks through the canals. Batorama provides a 70-minute tour all year round for 13.50€. 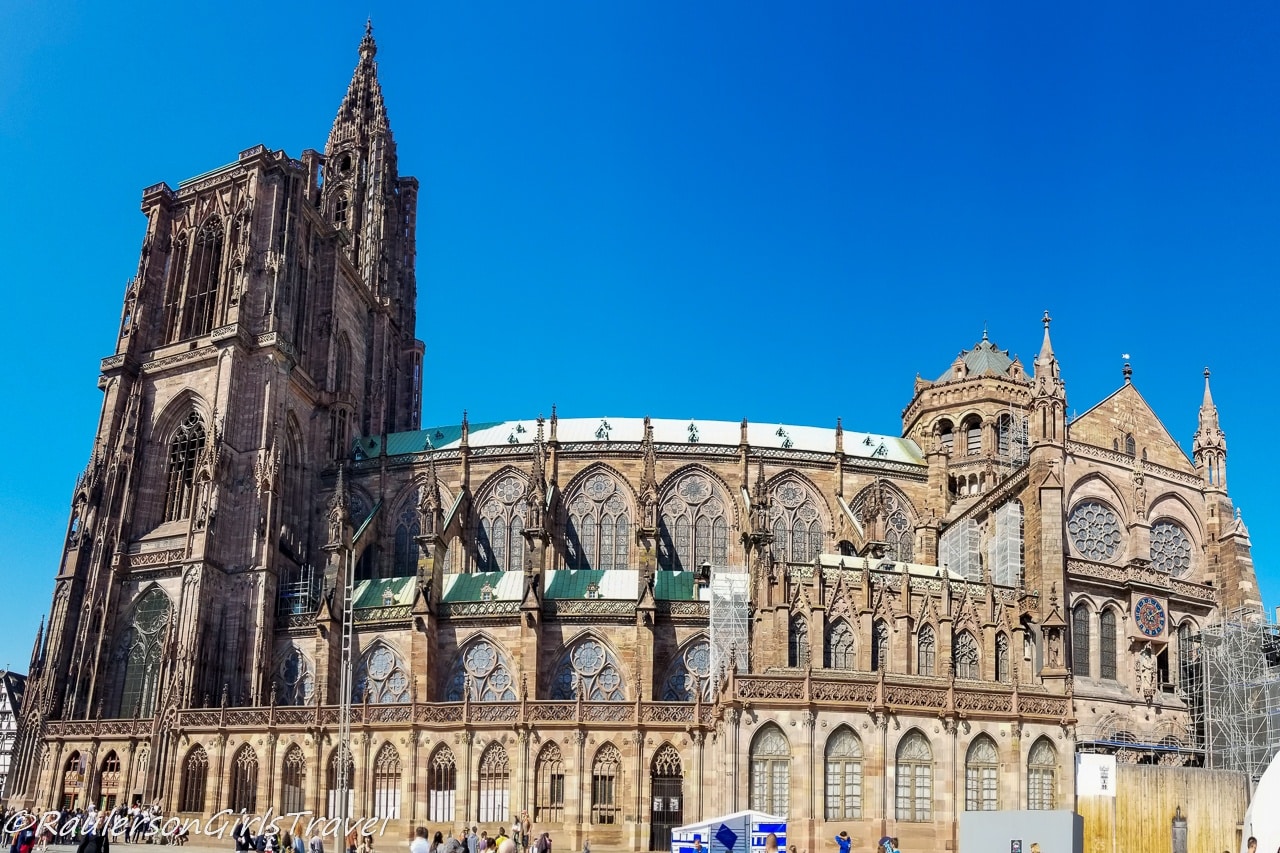 Strasbourg Cathedral is one of the most impressive Cathedrals I have seen in Europe. For 227 years, it was the tallest building in the world until 1874. Most of the parts of the cathedral are Romanesque architecture, but Strasbourg Cathedral is considered to be among the finest examples of late Gothic architecture. The details on the facade are so intricate and impressive. I do wish I had my camera with me when we were exploring Strasbourg. Although the photos captured with my Samsung Galaxy S8 were good, I would have gotten some amazing ones of the Cathedral with my wide-angle lens. That was a big oops walking out of the Airbnb without it this morning. We spent quite a bit of time exploring the outside and inside of the Catholic Cathedral. The altars were magnificent along with the organs. But, the highlight is the Astronomical Clock in the back corner. Although we weren’t visiting when it would go off, the crowds around it were already lining up. Next time I’ll stick around and watch.

When in France you have to try as many of the local baked goods and pastries as you can. For some reason eating a croissant in France is better than eating one at home. We went to a local bakery Au Pain de Mon Grand-Pere, for breakfast on my birthday and was stuffed by the time we left. You can always trust that a restaurant will be good when you see a line out the door, and this bakery was no exception to that rule. We waited in line for a bit, getting hungrier by the moment with smelling all the delicious bread. When it was our turn, Michelle’s family ordered practically one of every pastry they had in the cabinet. I was able to practice my French and order a bit more from the server. I’m grateful that I can practice it as much as I have had this year. Although I am not even close to being fluent. I can get by and order my food in French. A small accomplishment in my book. 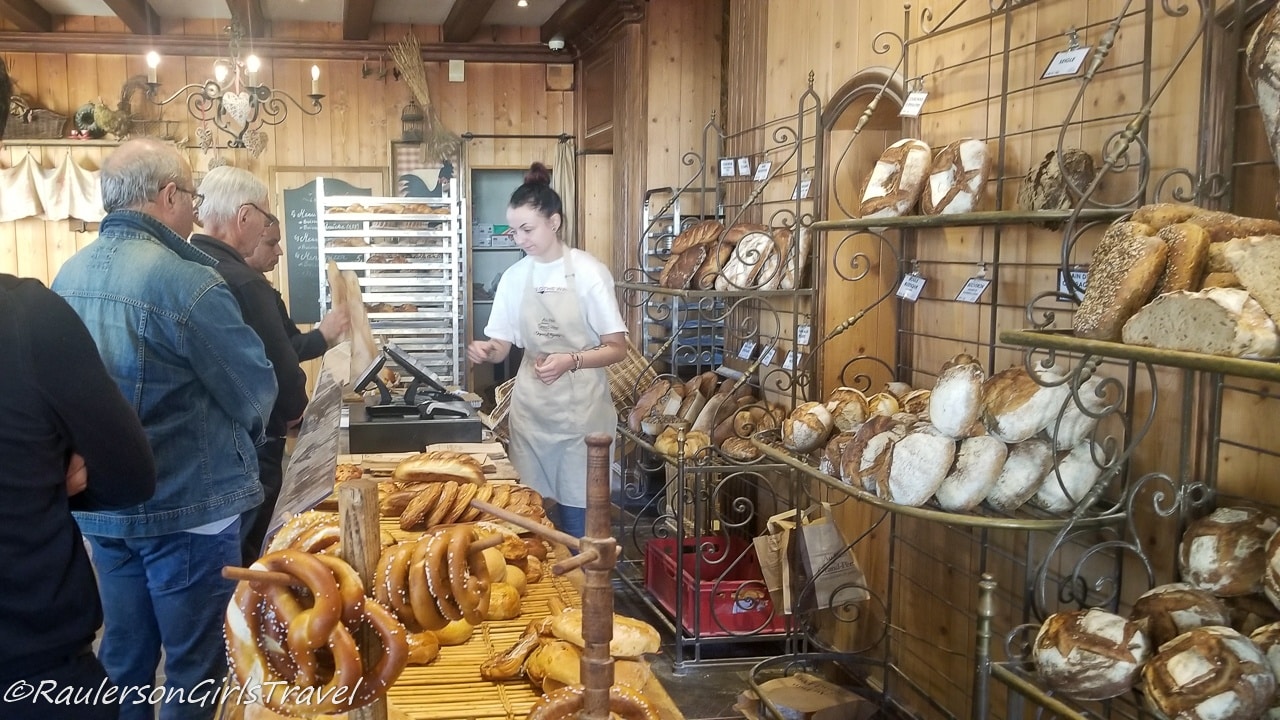 The other treats we tried in Strasbourg were the desserts (ice cream and waffles). Of course, this was after a great lunch sitting outside by the river. We even tried some of the local beer that is famous in the Alsace region. Sometime you can’t go wrong trying as much as the local cuisine as you can. Although I do tend to dip into Western food every once in a while. 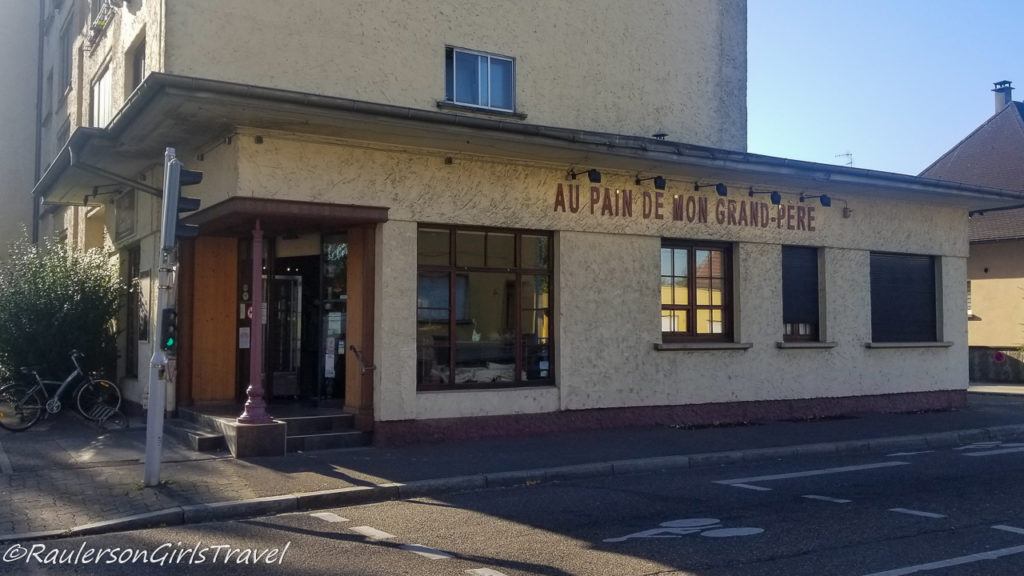 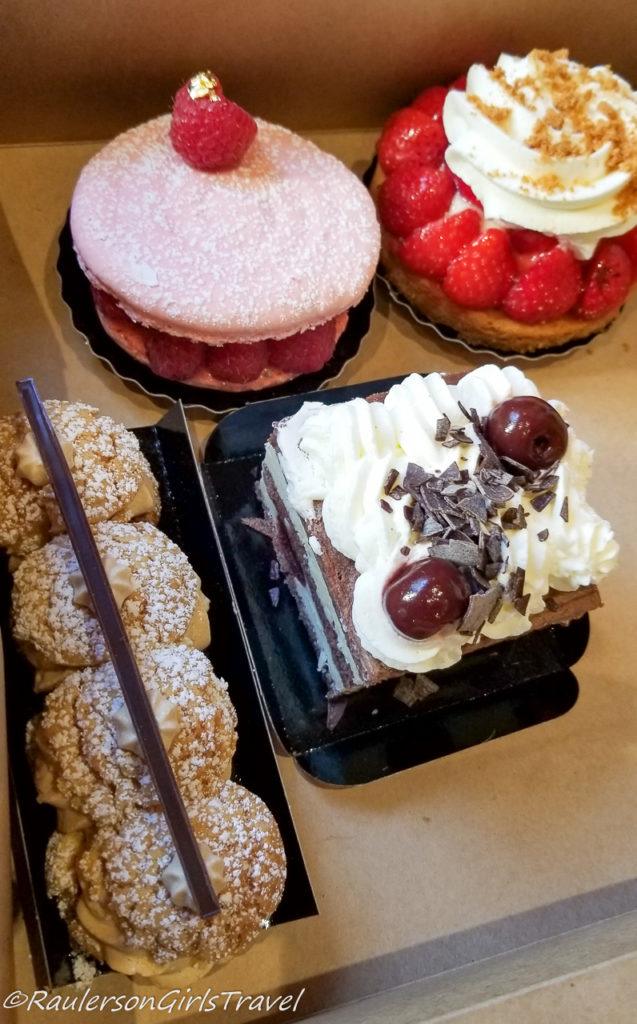 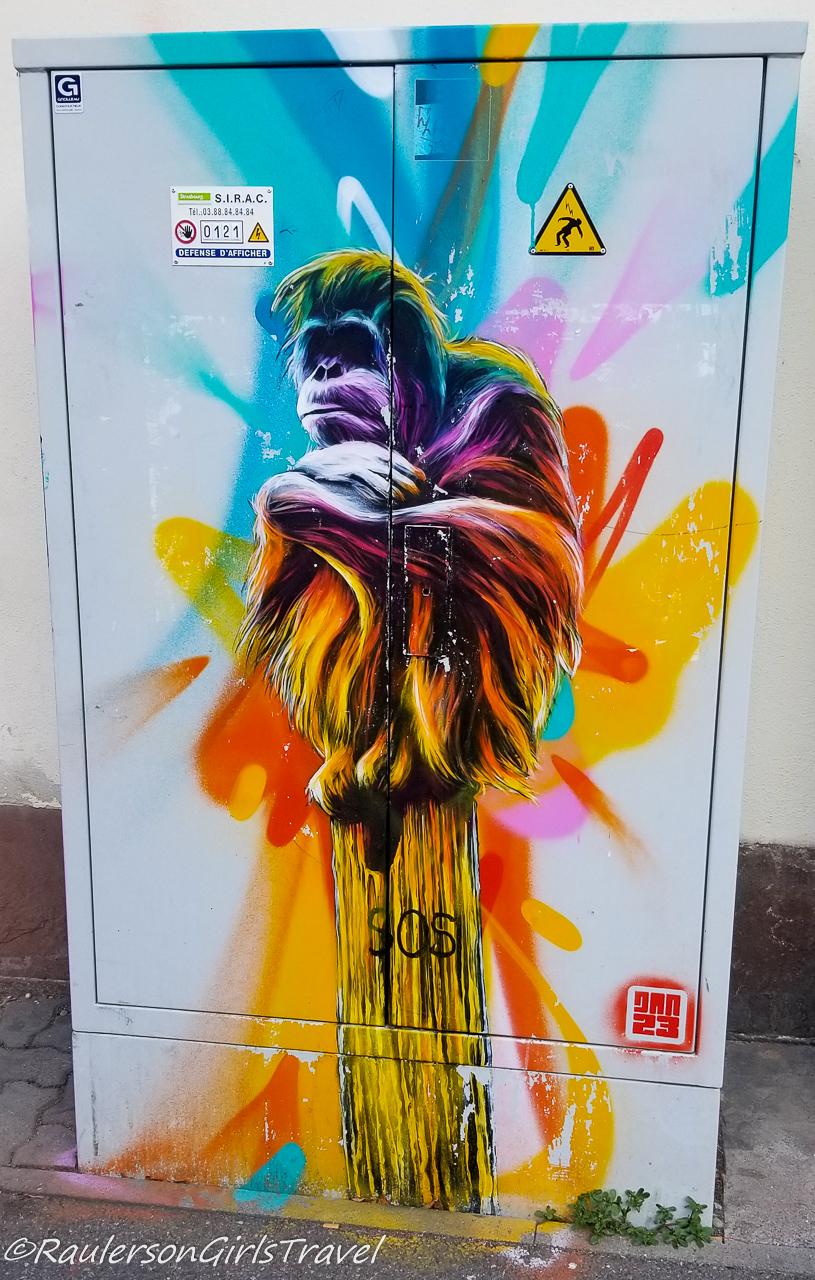 If you have been following my travels around the world, you know that I love finding great street art. And I was astonished to find as much as I did in Strasbourg. Although it wasn’t in the usual places, which made it more fun when I came across a colorful art mural in Strasbourg. 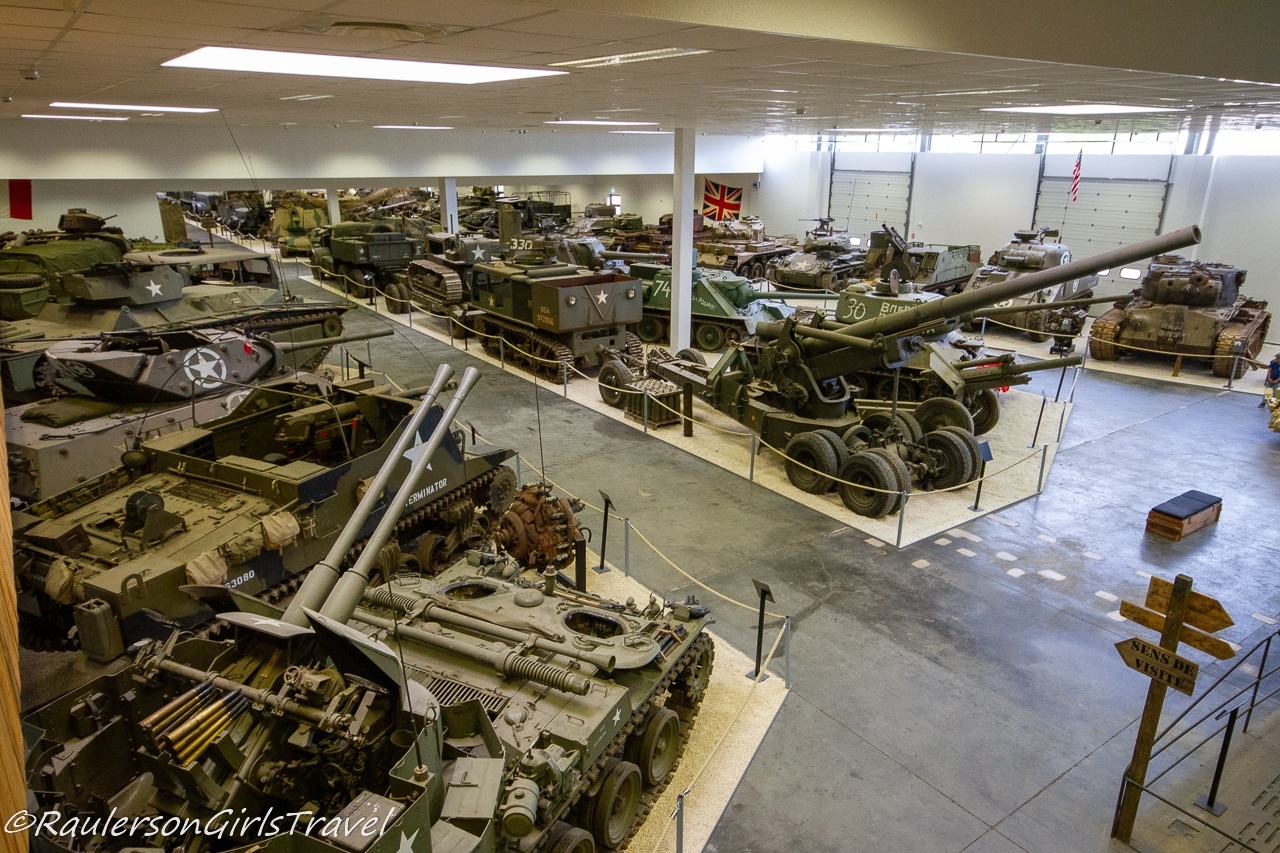 MM Park France is one of the largest World War 2 Museums in Europe located in La Wantzenau in Alsace. The founder, Eric Kauffmann, spent over 20 years collecting and finding memorabilia and tanks from the Second World War. The museum is over 7000 meters squared filled with warehouses of tanks, boats, uniforms, and weapons from every country, a restaurant, and a leisure park (zip line & rope course). This museum has more than 120 vehicles, an airplane, as well as a 20-meter German star afloat, visible in the basin of the Kriegsmarine base rebuilt. They even have their own restoration area. I was overwhelmed visiting this museum, there was so much Nazi memorabilia, but I had to remember we were right on the border of Germany. There is also a large section upstairs showcasing the missing Jews and resistance. A visit to this museum is a must for any military or war historian or if you want to understand and learn more about this devasting world war. Open hours are every day from 9 a.m. to 7 p.m., and the entrance fee is 9€.

Strasbourg has blown my expectations right out of the water. You couldn’t imagine a prettier place with so many buildings and flowers to photograph. I always love visiting France and now will add Strasbourg on my list of must return places to visit further. I hope you enjoyed reading and seeing all about Strasbourg, France. Strasbourg, France, with all of its charm and timber-framed buildings it deserves to be at the top of your list. Are you going to add this to your bucket list now?

If You Enjoyed These Things to Do in Strasbourg Post, Sign Up To Receive Posts By Email or…

Join us on Facebook for regular updates and related articles
Check us out on Instagram to see what we are up to in photos
Follow us on Twitter for links to great travel articles curated just for you
View and purchase your favorite of my travel photos on SmugMug. And if you don’t see the one you want on the site, send me a comment below, and I’ll add it.
Or share this “Top 10 Surprising Things to Do in Strasbourg, France” with others by pinning on your France Travel Pinterest board! 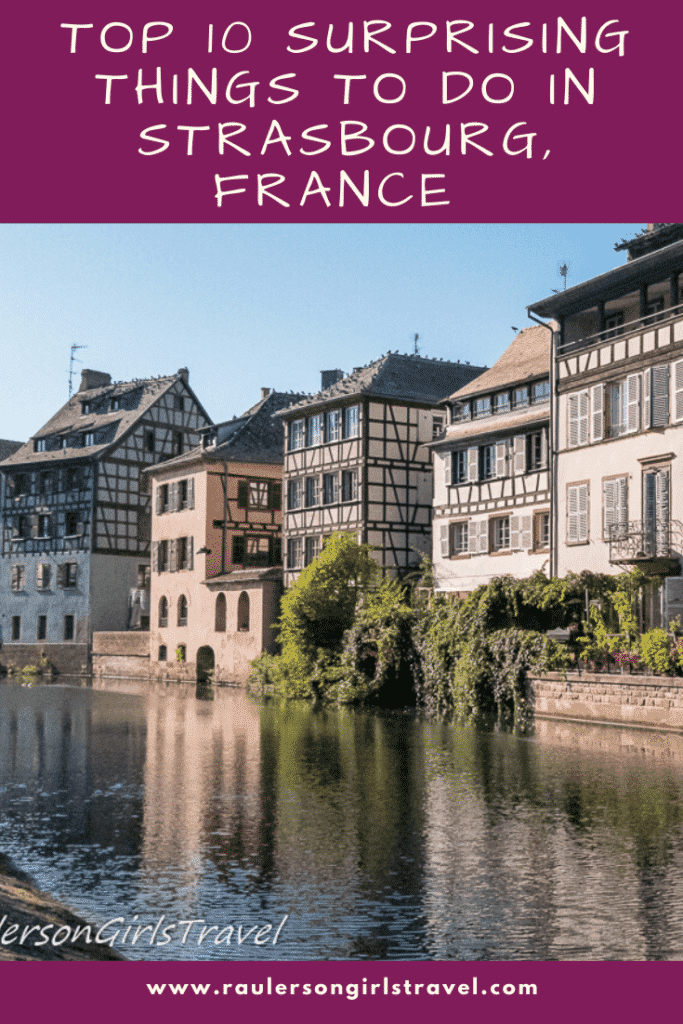 If you are coming to France for a visit, check out these posts for further travel inspiration: