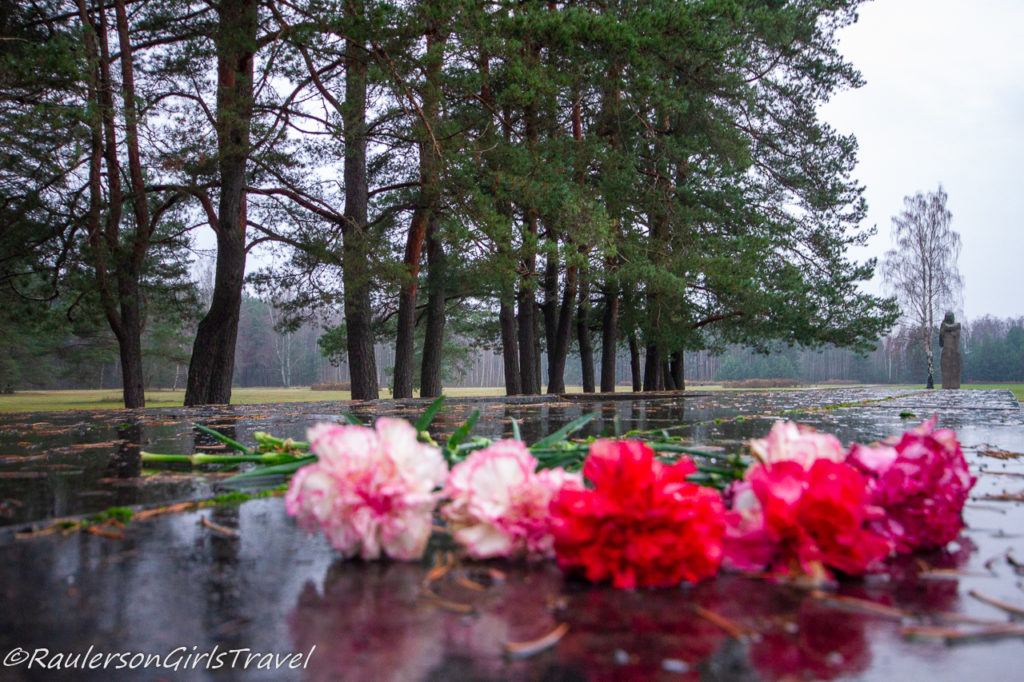 Sitting in the back of the Uber car, as we drive further out of Riga, I wonder where we are going. My friend, Sara, wanted to check out a memorial where Salaspils Concentration Camp used to be located. Both of us have never been there before so, we’re unsure of what to expect. The car dropped us off in a parking lot with one plaque that had a map and nothing else to see but tall pine trees and a paved walkway. What we did find at the end of the path surprised us. We walked into a large clearing surrounded by a forest of tall pines so thick you can’t see anything else, and it is the most peaceful, serene place for a moving memorial of a barbaric and heinous past, and then we heard the drums. Or what we thought were drums, but upon further contemplation, it sounded like a heartbeat. And we were the only two people there. 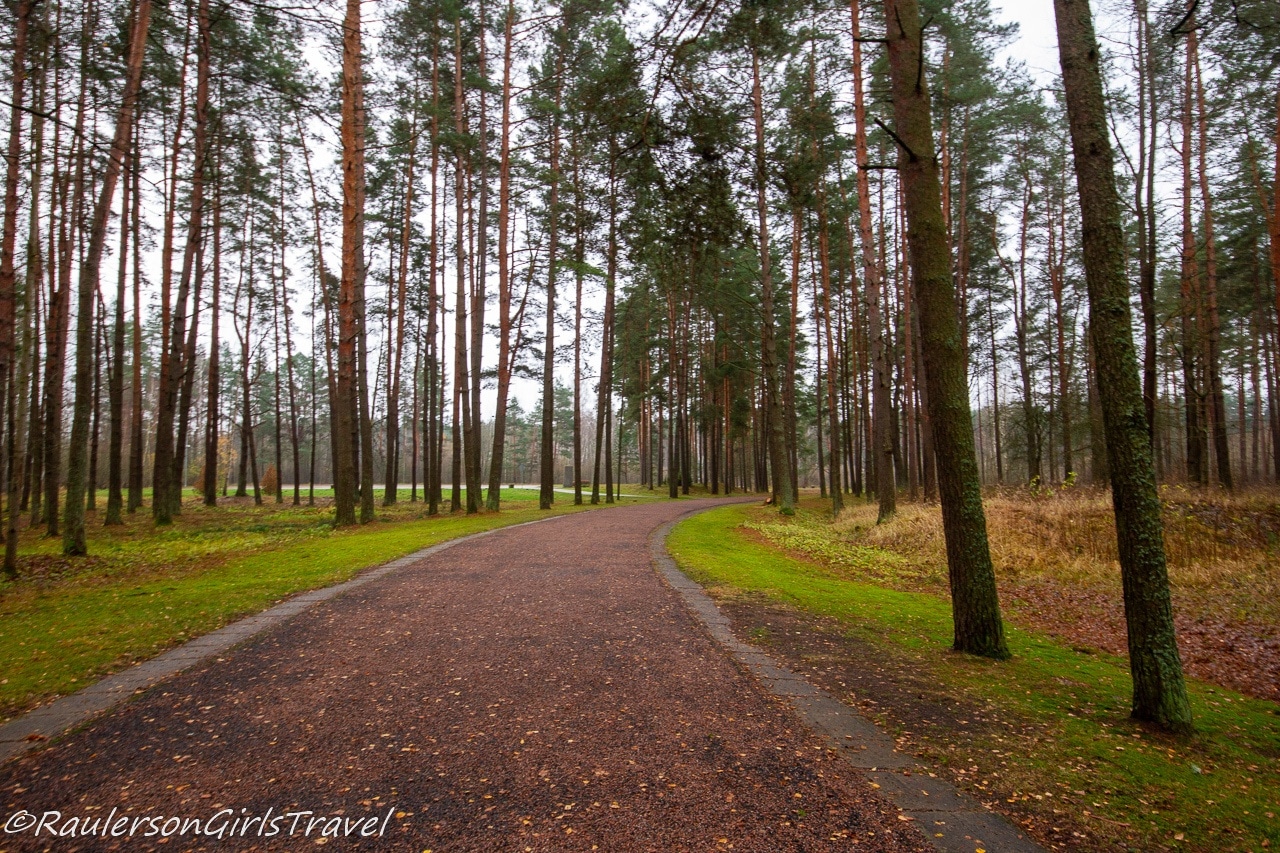 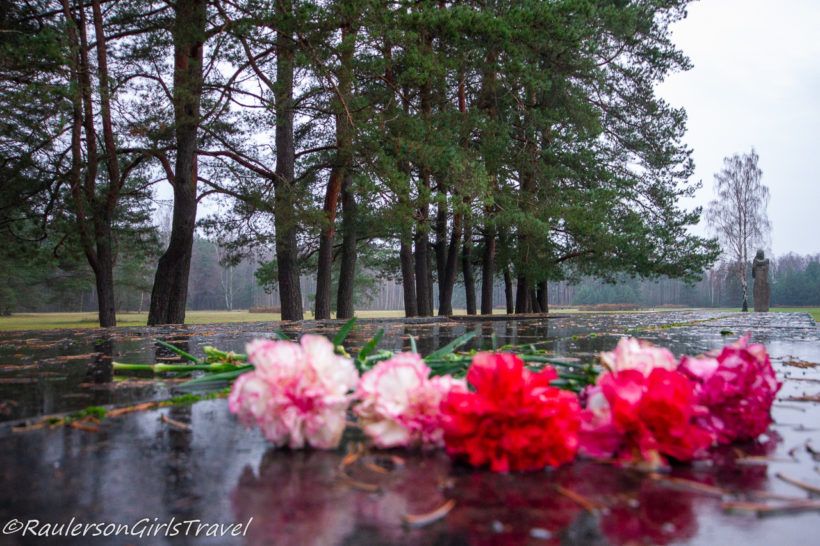 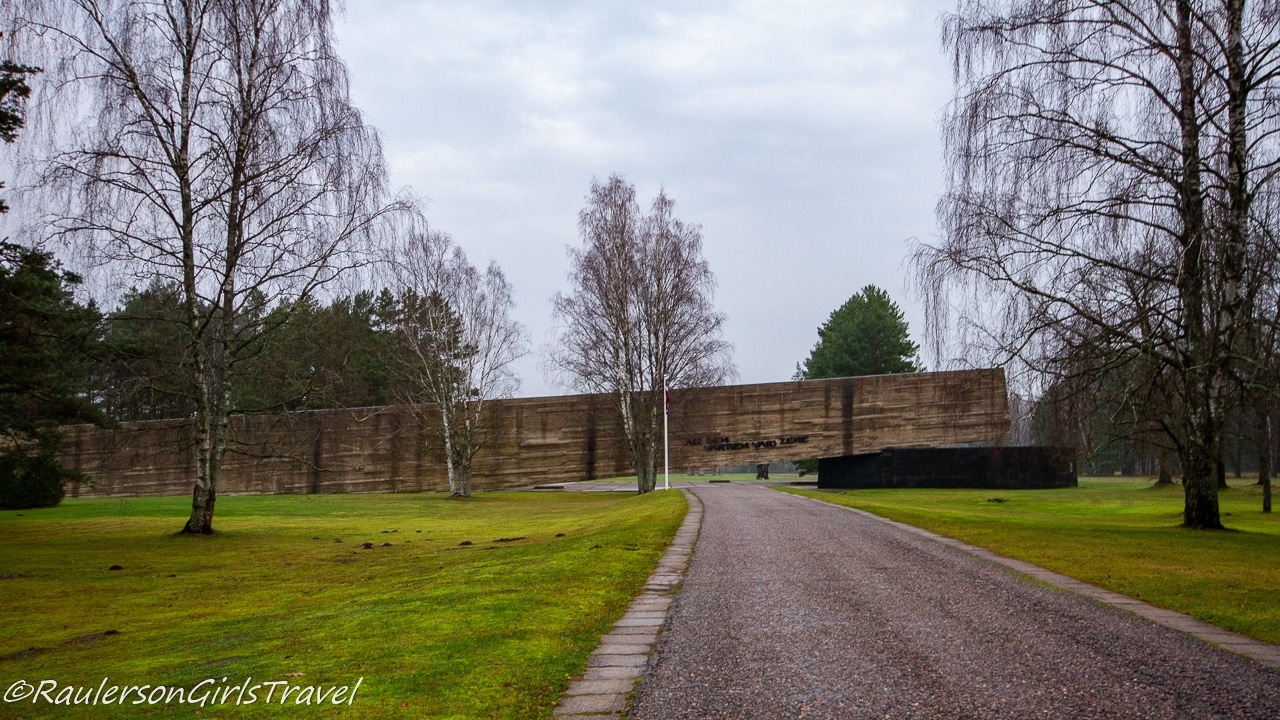 The Germans created Salaspils at the end of 1941 as a labor camp. The plan was to have the police confine people arrested in Latvia and to house Jewish people deported from other countries. The camp comprised of 15 barracks that housed up to 1,800 prisoners. Although it was supposed to be a police prison and labor camp, Salaspils became comparable to a German concentration camp in the way it was organized and the treatment of prisoners. Conditions were harsh and arduous, but even without gas chambers, between 2,000 to 3,000 prisoners died from illnesses, heavy labor, executions, and epidemics. 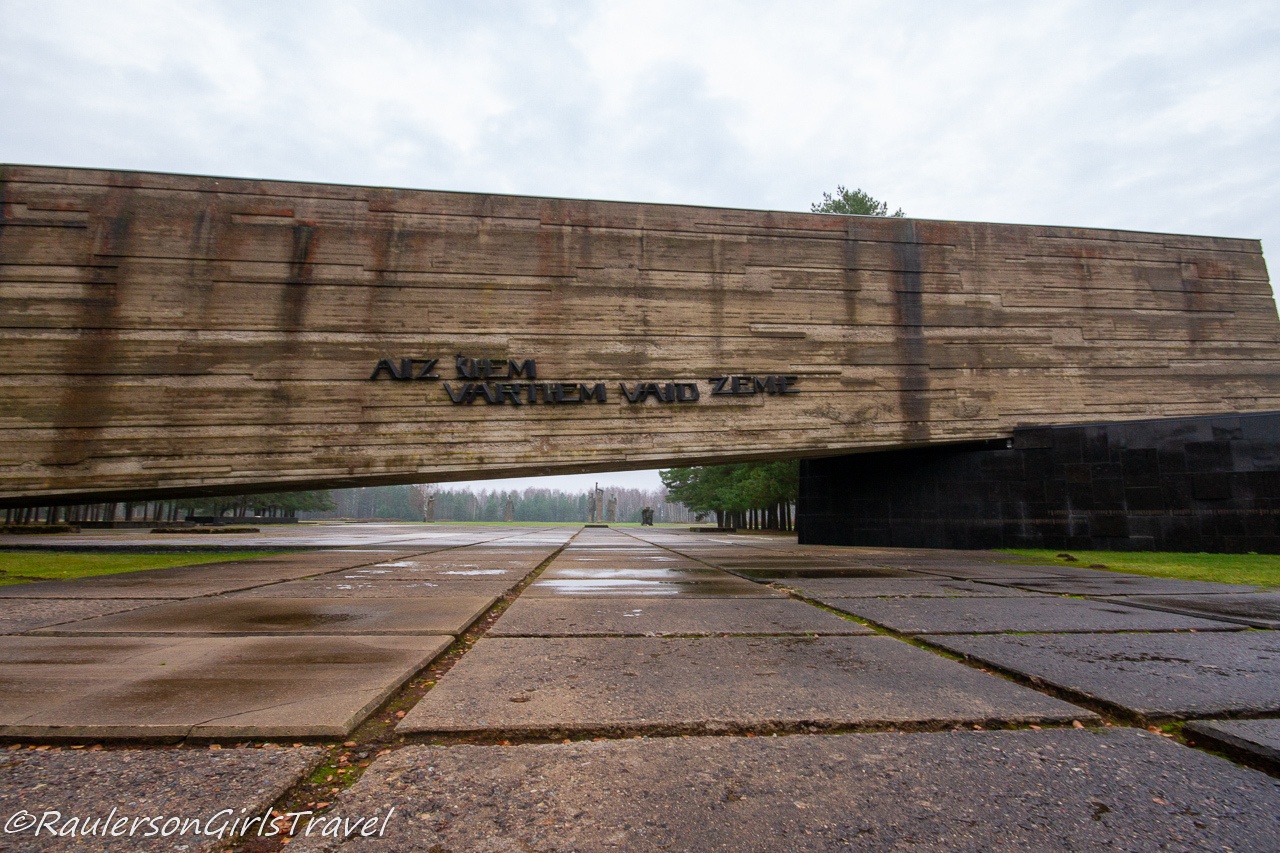 The memorial opened in 1967 as one of Europe’s most significant monument complexes covering 25-hectares honoring the victims of Nazism. The entrance to the monument has you traveling below a 100-meter concrete wall. This is the exact spot of the barbed wire fence, symbolizing the border between life and death. The wall bears a Latvian inscription “Beyond these gates the land groans.” Which is fitting for what you find once you are on the other side. Inside the memorial, you are welcomed with peace, tons of space, and a heartbeat? There are no natural sounds, not even wind blowing through the trees, which makes the heartbeat even more profound. The sound of a “metronome” is coming from a black slab toward the left. 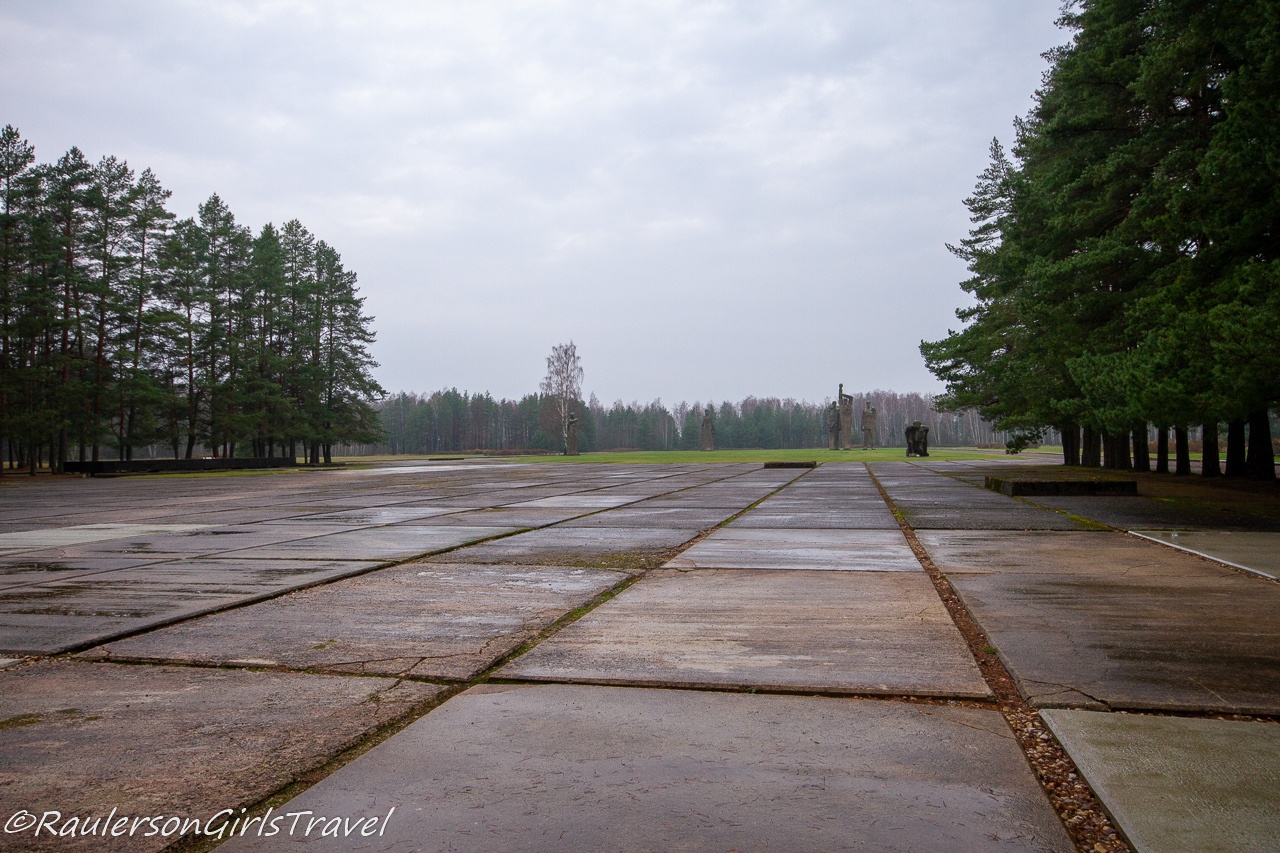 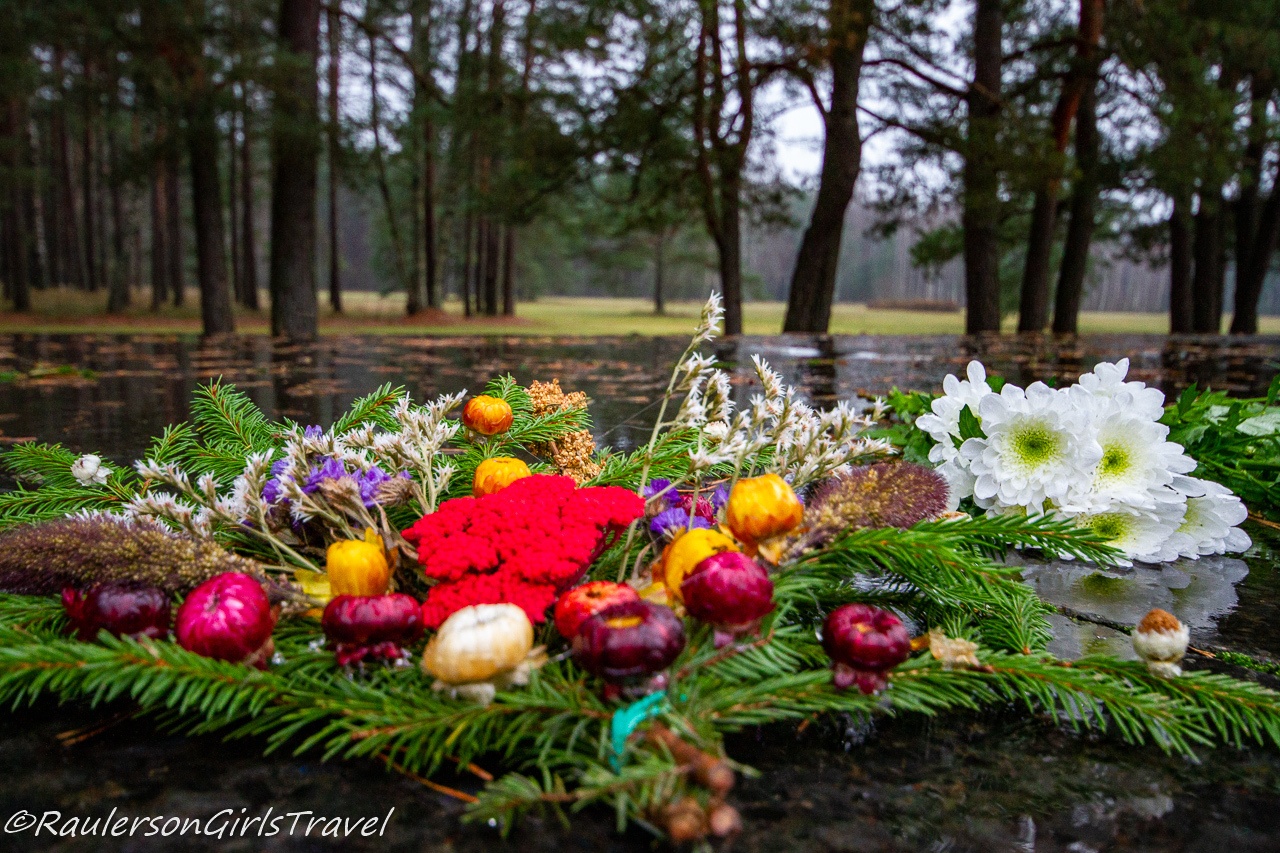 Inside the concrete gallery are long hallways leading up or down with small galleries at the end with photos and stories of what prison life was like. From their work conditions, their punishment, to getting gifts and letters from home, it is moving to see their words in this simple gallery. 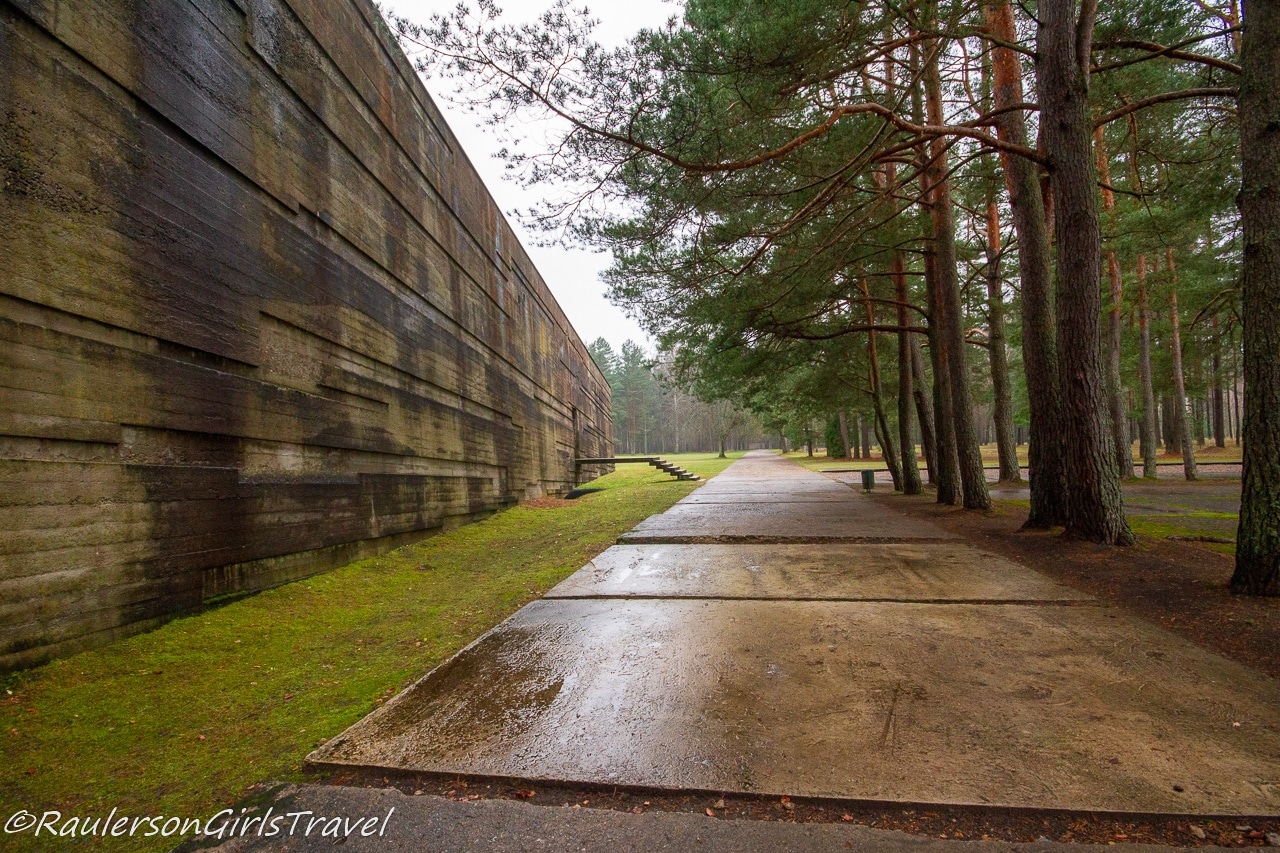 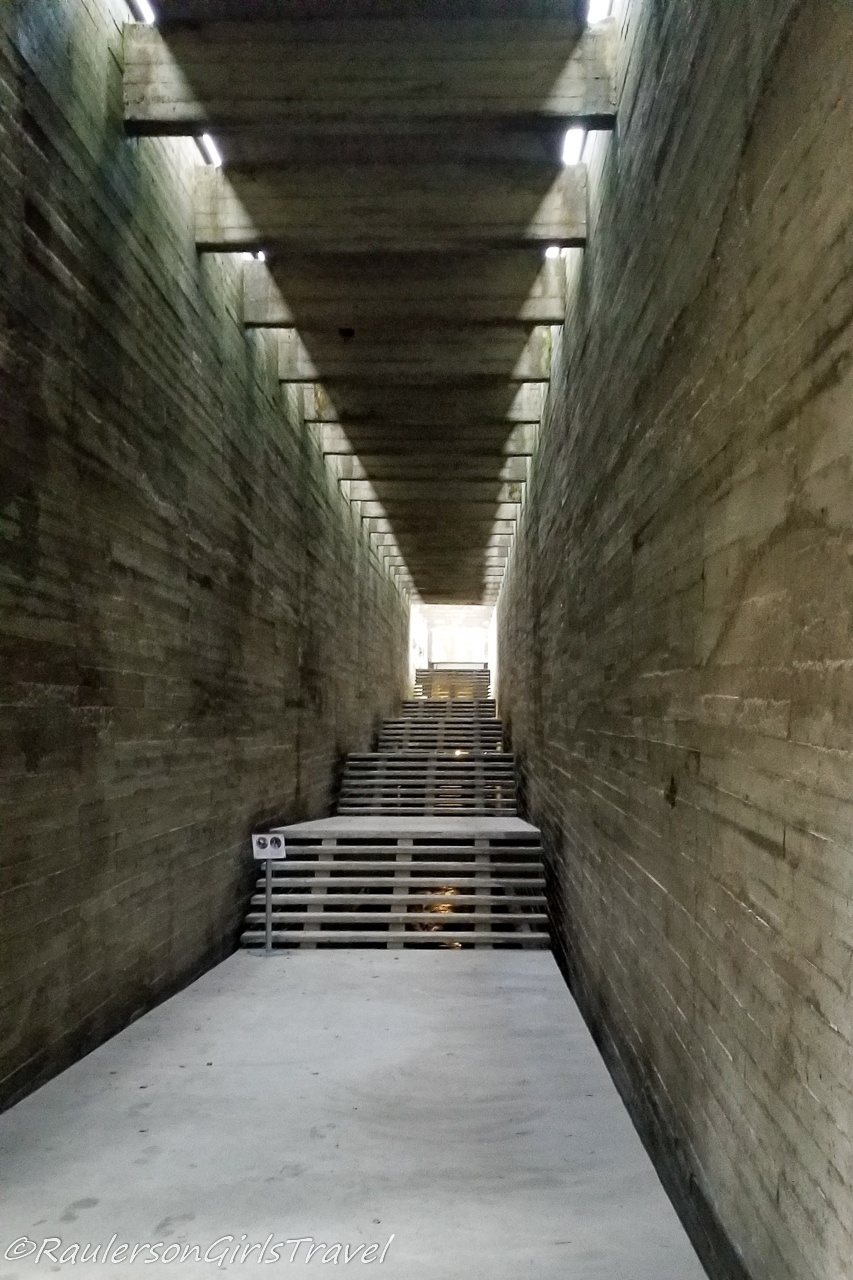 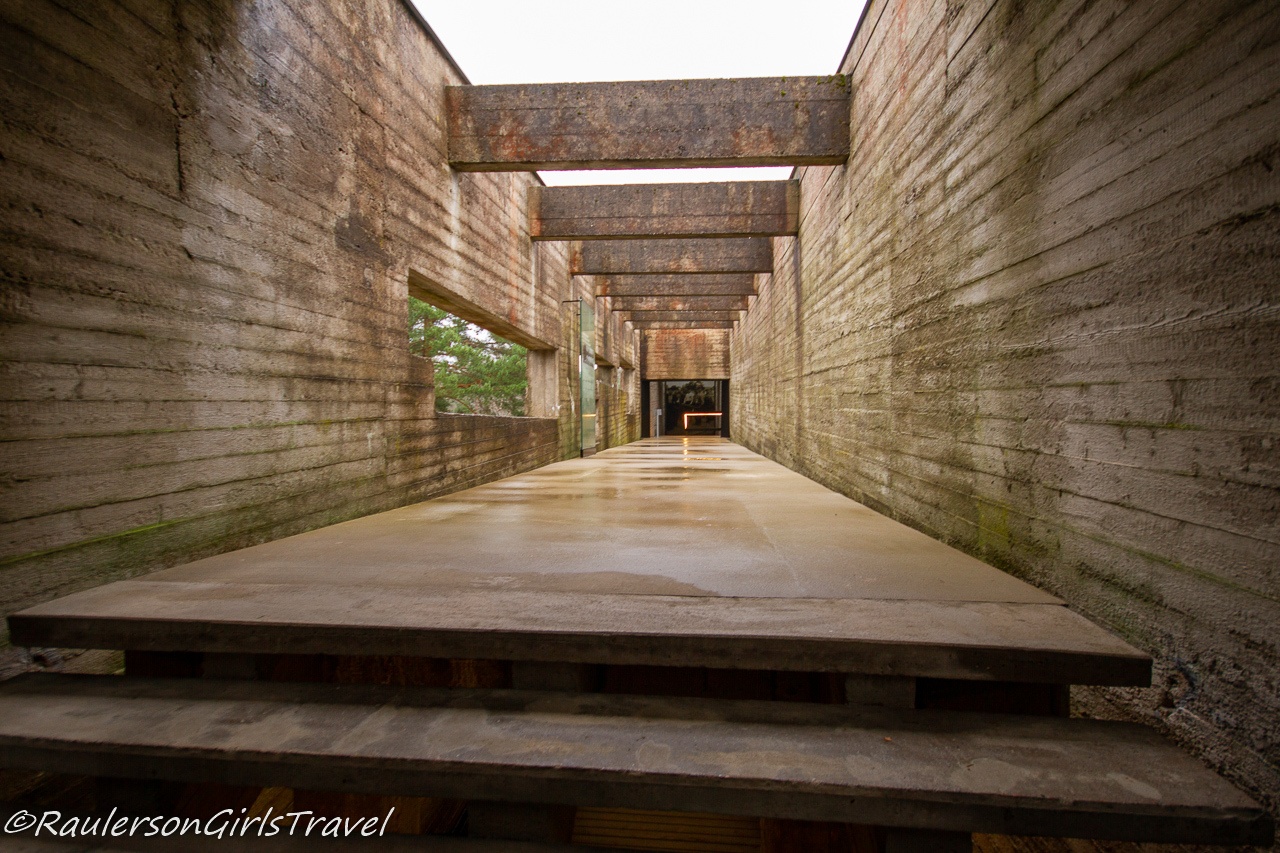 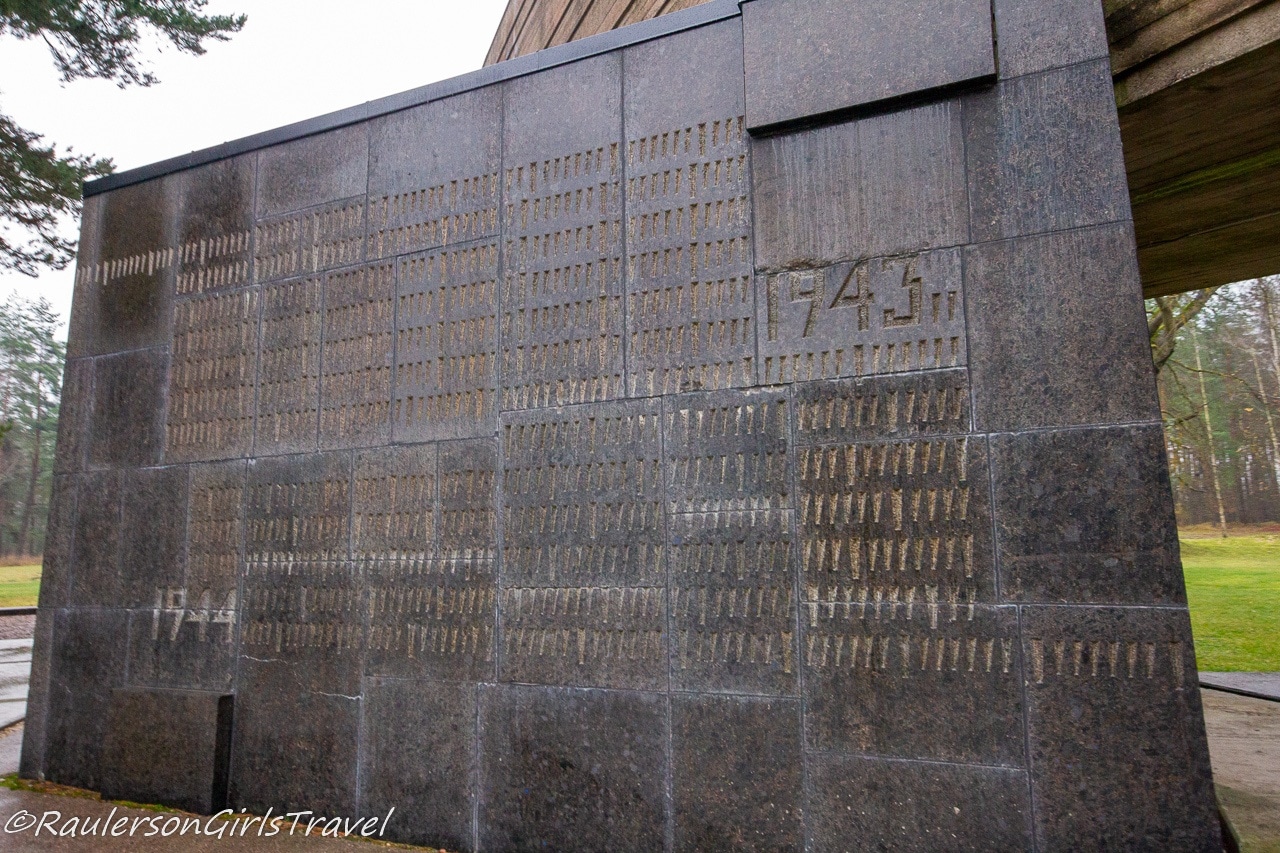 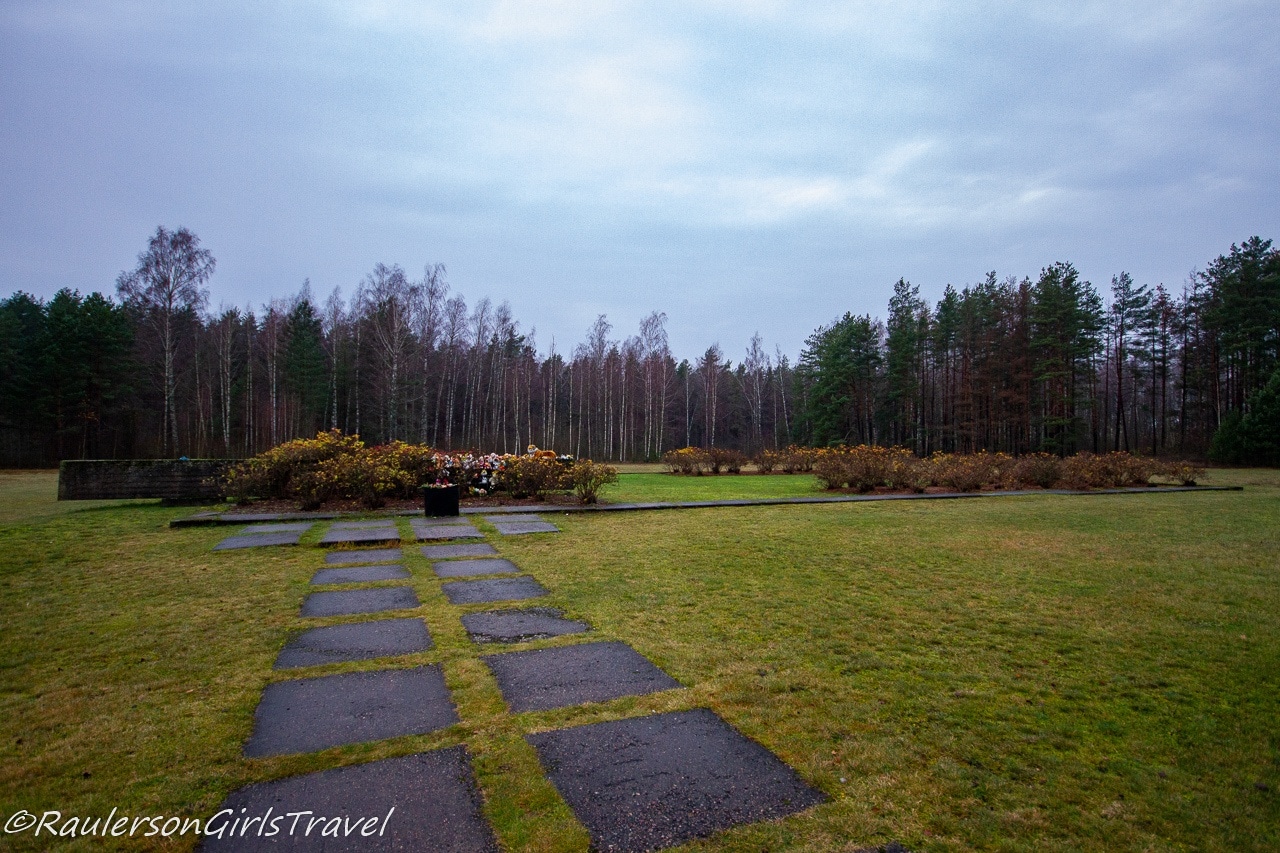 There is not much left of Salaspils Camp except the barrack foundations. Men were kept separate from women as part of the Final Solution to prevent them from having children and exterminate the Jewish race completely. Now all that is left is overgrown with plants and shrubs, but that doesn’t stop people from leaving flowers and gifts by the iron grates. 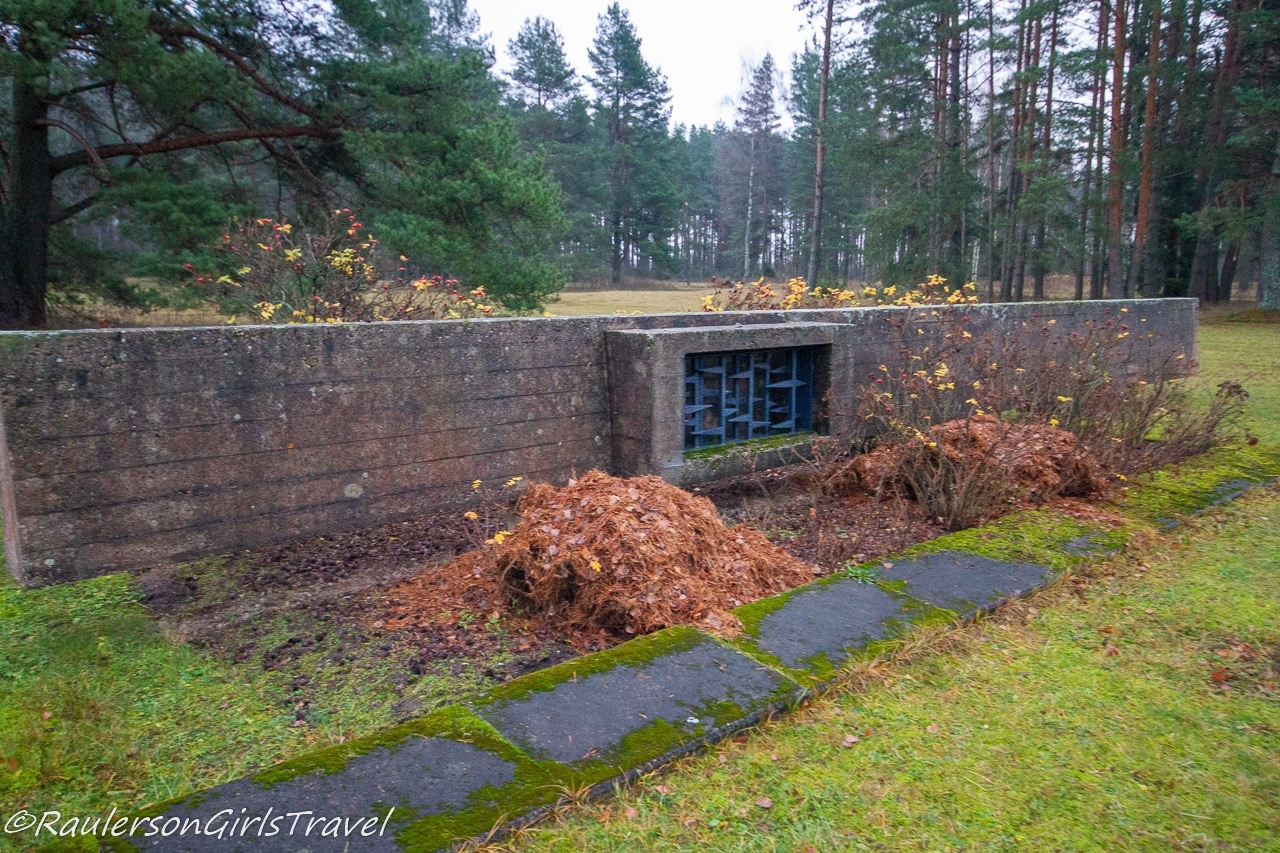 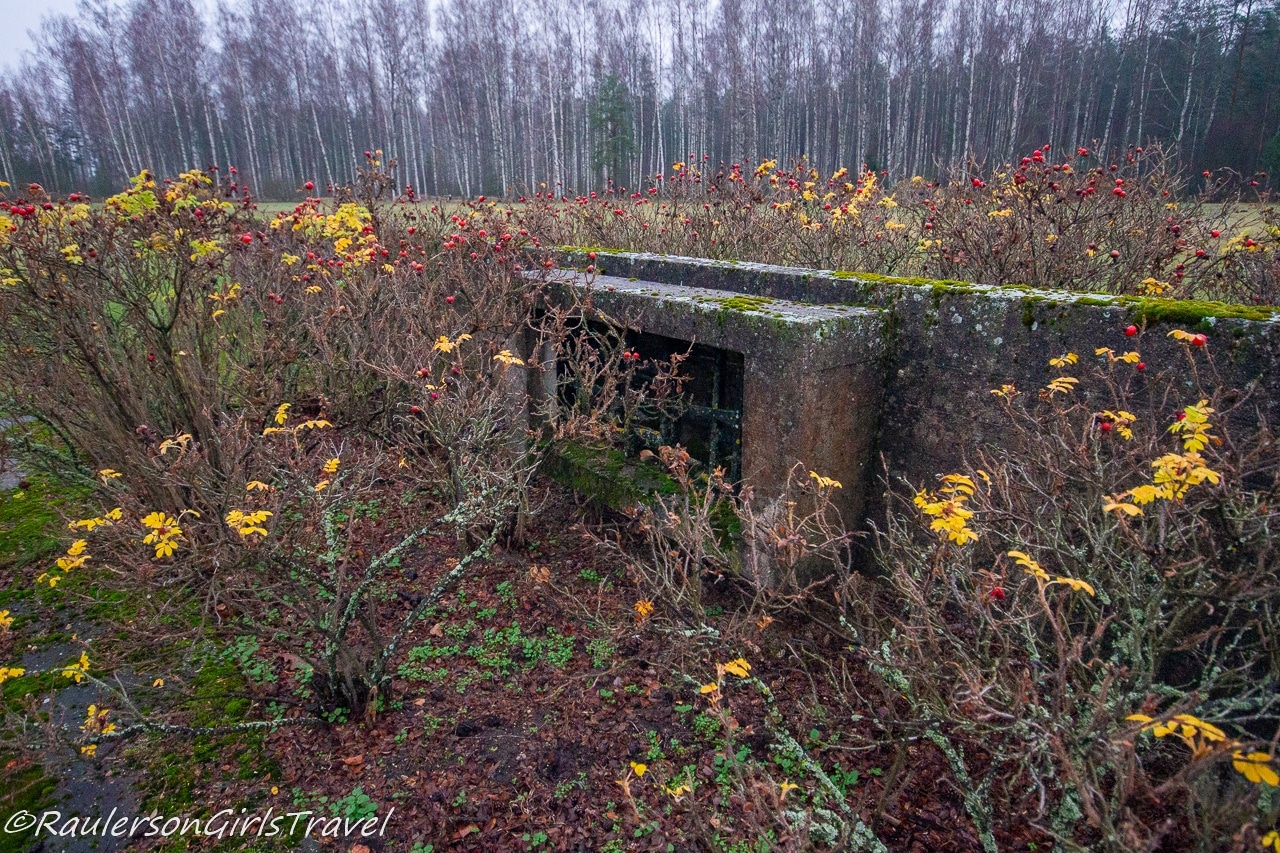 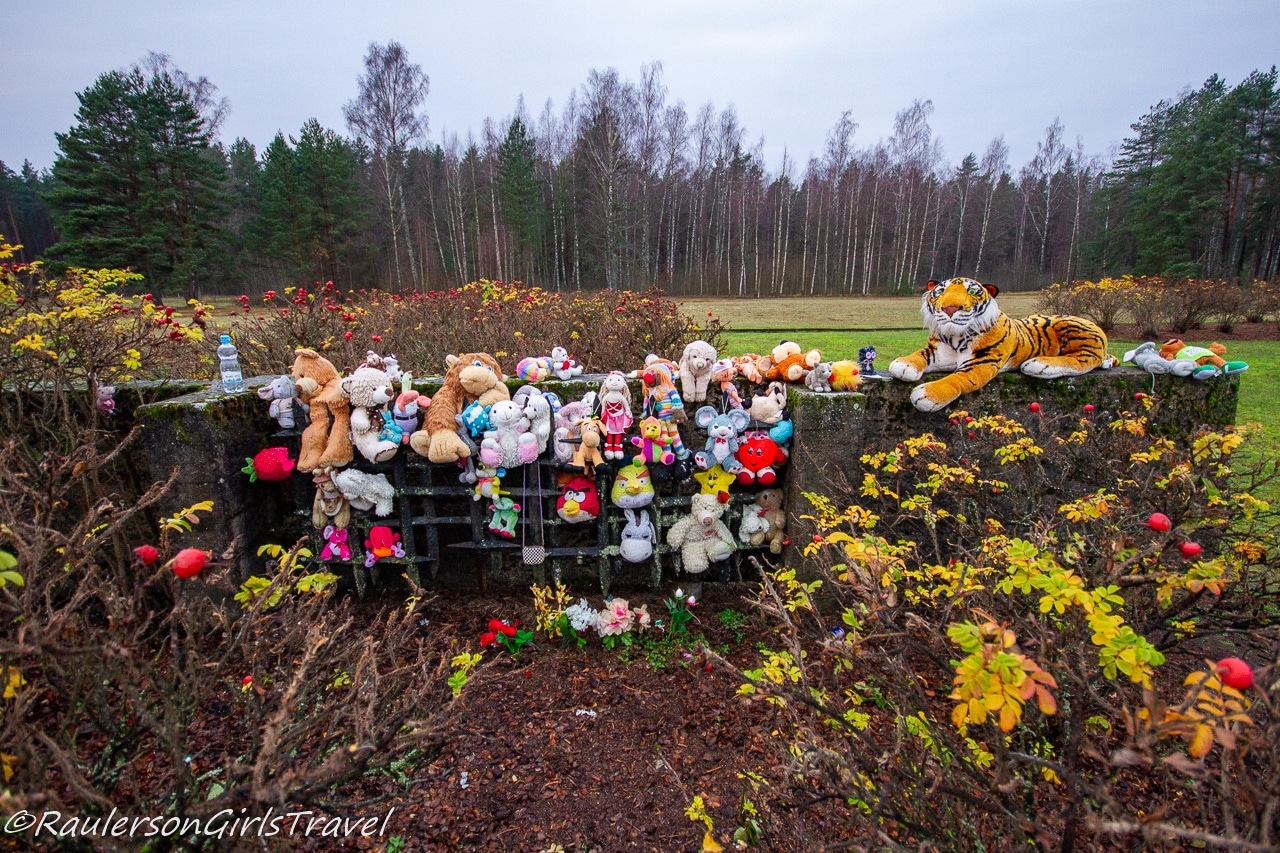 The barracks that have the most gifts and stuffed animals on it are what is left of the children’s barracks. The children were separated from their parents but did not have to work hard labor. Although that didn’t stop tragedy befalling them from malnourishment and diseases. Reports have the death total for children around 200, although there is a grave marker for over 630 children on the grounds. 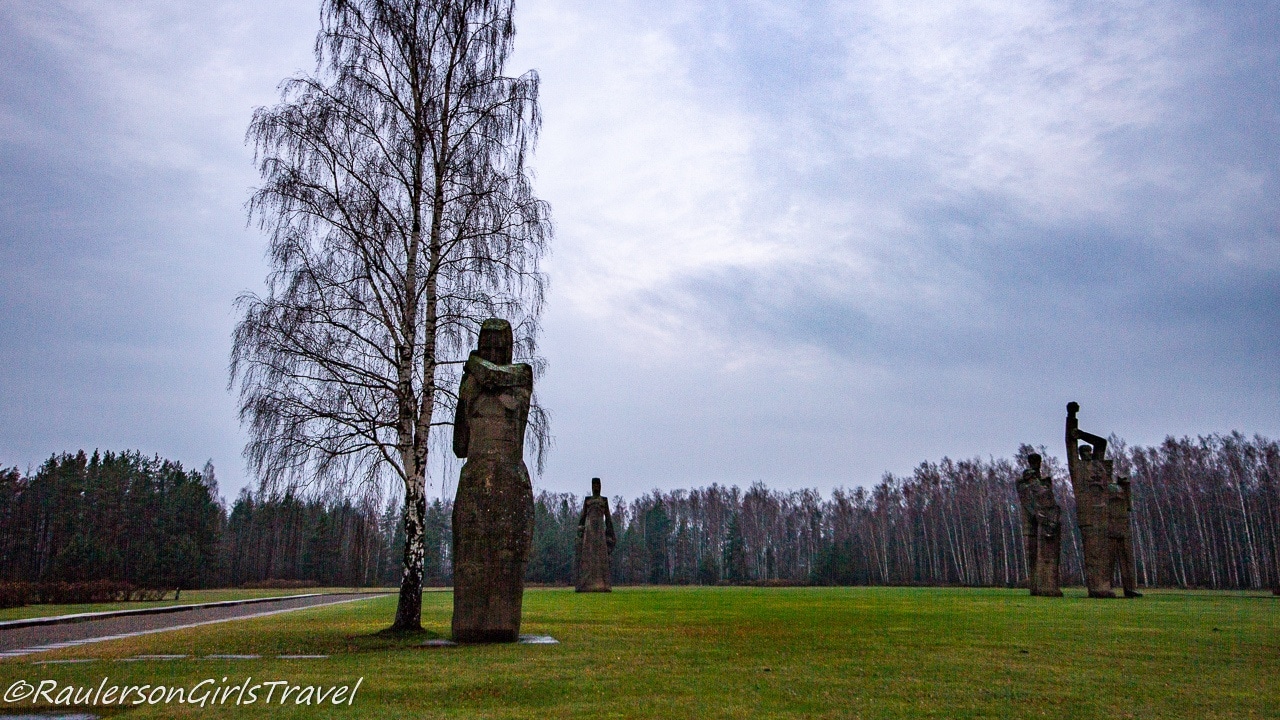 The Salaspils Memorial Ensemble expresses the ideas of humanism and compassion for the victims of Nazism. There is a path that takes you around the larger than life statues and paving stones to get even closer to them. The seven sculptures have a Soviet feel to them due to their size, chunkiness, and simpleness. The sculptures Solidarity, Oath, and Rot Front exhibit a somber solemnity that they endured hardships and still have faith in the future. Mother is a memorial to the children and their mothers who perished in the Salaspils Camp or who were separated for life. Deep pain is represented in Humiliated with the lady on bent knees and her arm covering her face. Still, even the collapsed Unbroken exudes confidence that freedom-loving people around the world can never be broken and can get back up. 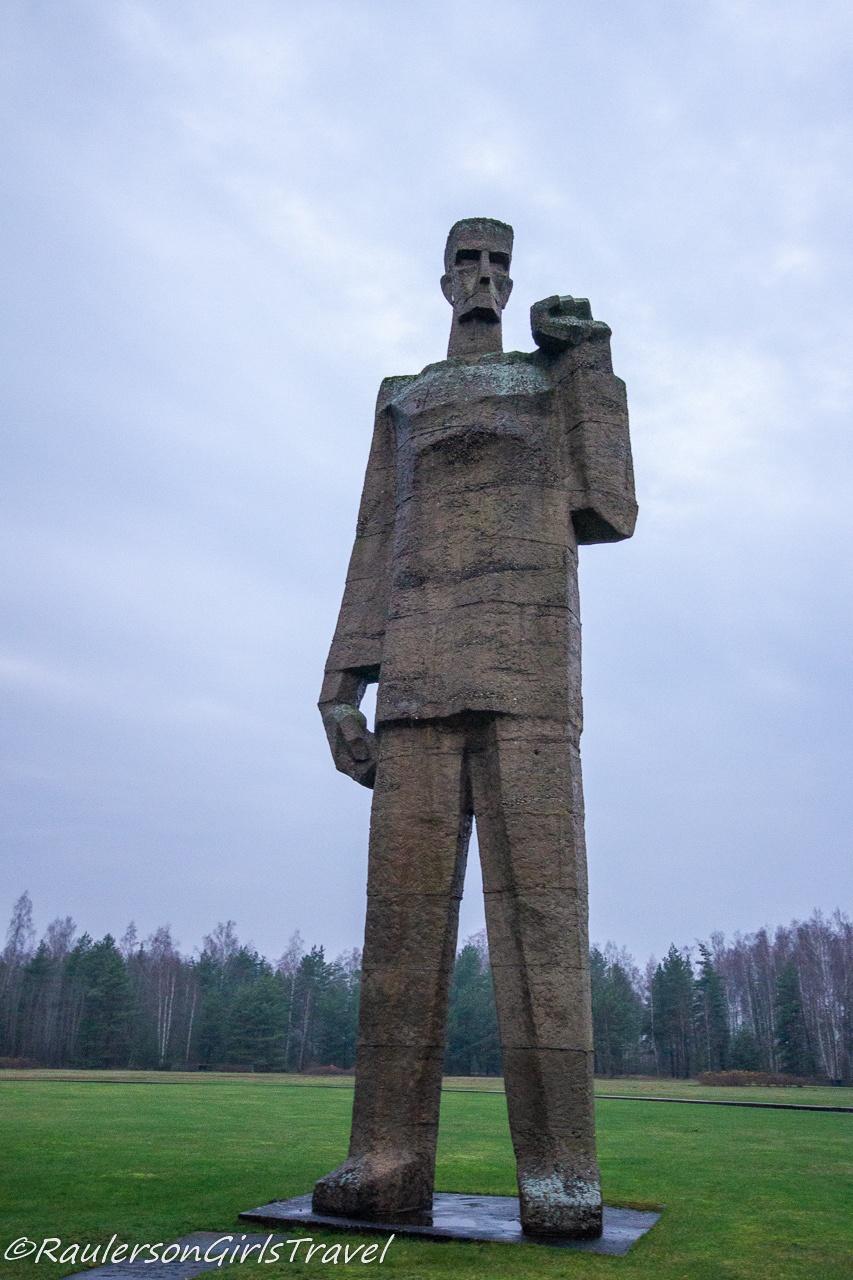 Rumbula Forest is one of the largest sites of mass murder of Jews in Europe. On November 30 and December 8, 1941, over 25,000 men, women, and children were shot. This was done after they were forced to walk from entirely on foot from the Riga Ghetto. The intent was to clear out the Latvian Jews in the ghetto so, the German and Austrian Jews could be deported here.

The plan needed to be carried out in two days, killing 12,000 people each day. Six pits were designed in levels, like an inverted pyramid, with the broader levels towards the top, and a ramp down to the different levels to allow the victims to be marched into their graves. After being forced out of their homes, the ones who weren’t murdered in the ghetto lined up into columns under the ruse that they were being resettled and could bring 20 kilograms of luggage. They were then marched out of the Ghetto and forced to walk 6.2 miles to the Rumbula forest. Once at the site, they were forced to disrobe and step naked straight into the death pits to lay down directly on top of the previous shooting victims (some of them were still writhing and bleeding). The marksman would then shoot them with one bullet to the back of the head.

The Rumbula Forest Memorial was a little hard to find in the dark. We ended up getting an Uber to take us from Salaspis directly to Rumbula. On the road leading into the forest, there is a stone marker next to a large metal sculpture that states that thousands of people were driven to their deaths along this road. Our driver was courteous and waited for us to quickly see what we could in the dark of the memorial before driving us back into town.

At the memorial ground entrance, there are stone plaques that are inscribed in four languages (Latvian, Hebrew, English, and German) with information about what happened here in Rumbula and the memorial history. Walking up the hill, you encounter separate concrete frames that mark the mass graves. If you keep walking further up the hill, you will find the center of the memorial, which is an open area in the form of the Star of David. A menorah sculpture stands in the center surrounded by thousands of stones bearing the names of the Jews murdered here. We by no means spent enough time visiting this memorial, and in the dark, it was hard to see and capture the essence of what happened in the Rumbula forest those two days in 1941. You are best to visit during the day to get the real feeling of this place. 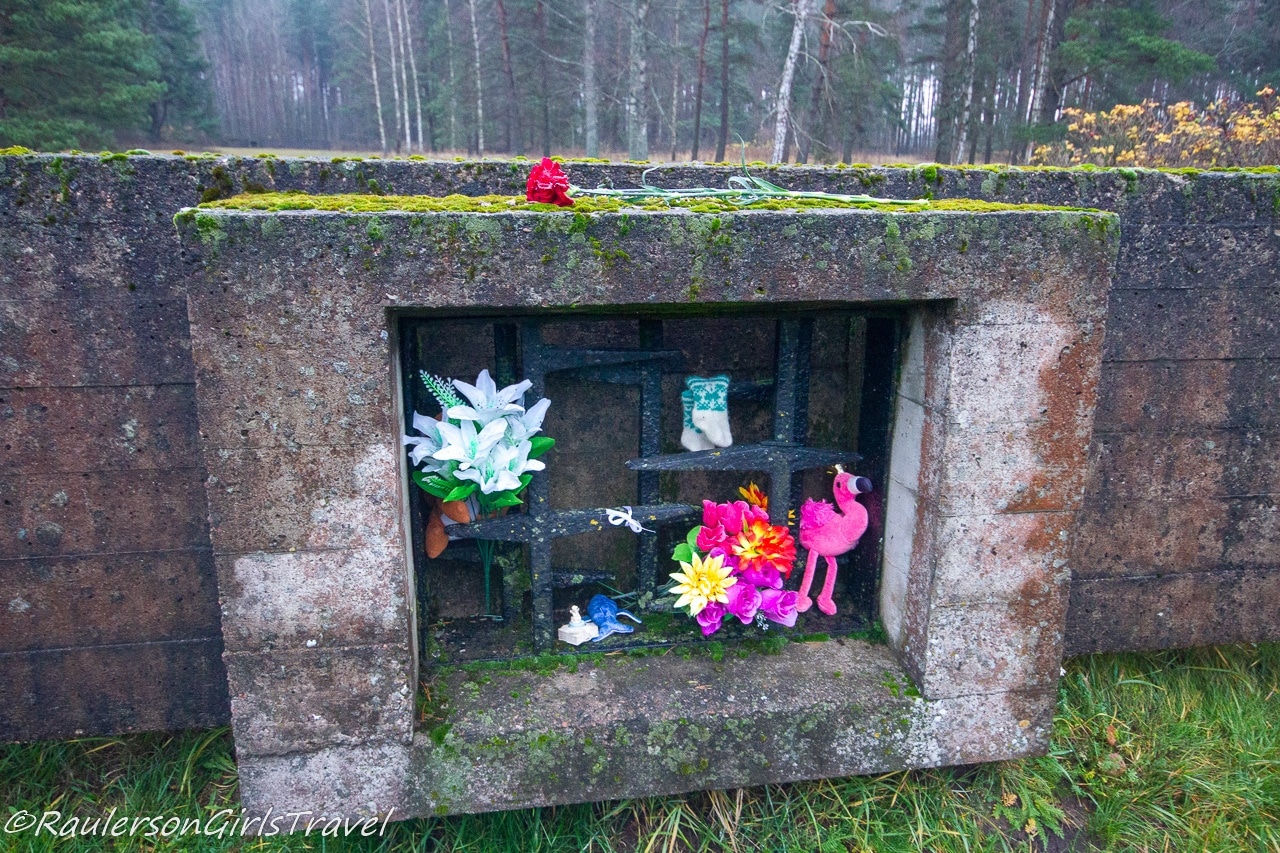 There is a stone by the concrete wall that is inscribed with “To honor the dead and as a warning to the living. In memory of the Jews deported from Germany, Austria, and Czechia, who from December 1941 to June 1942 died from hunger, cold and inhumanity and have found eternal rest in the Salaspils forest.” This saying embodies the entire memorial. If you do want to visit, it is located about 5 km from Salaspils Railway Station and Tourism Information Centre, and the indoor section is open from 10 a.m. to 5 p.m (April-October) and 10 a.m. to 3 p.m. (November -March). It is a shame that more people don’t visit Salaspils as it is a moving memorial and should be remembered and visited.

Join us on Facebook for regular updates and related articles
Check us out on Instagram to see what we are up to in photos
Follow us on Twitter for links to great travel articles curated just for you
View and purchase your favorite of my travel photos on SmugMug. And if you don’t see the one you want on the site, send me a comment below, and I’ll add it.
Or share this “Remembering the Forgotten at Salaspils Memorial Ensemble and Rumbula Forest Memorial” with others by pinning on your Europe Travel Pinterest board! 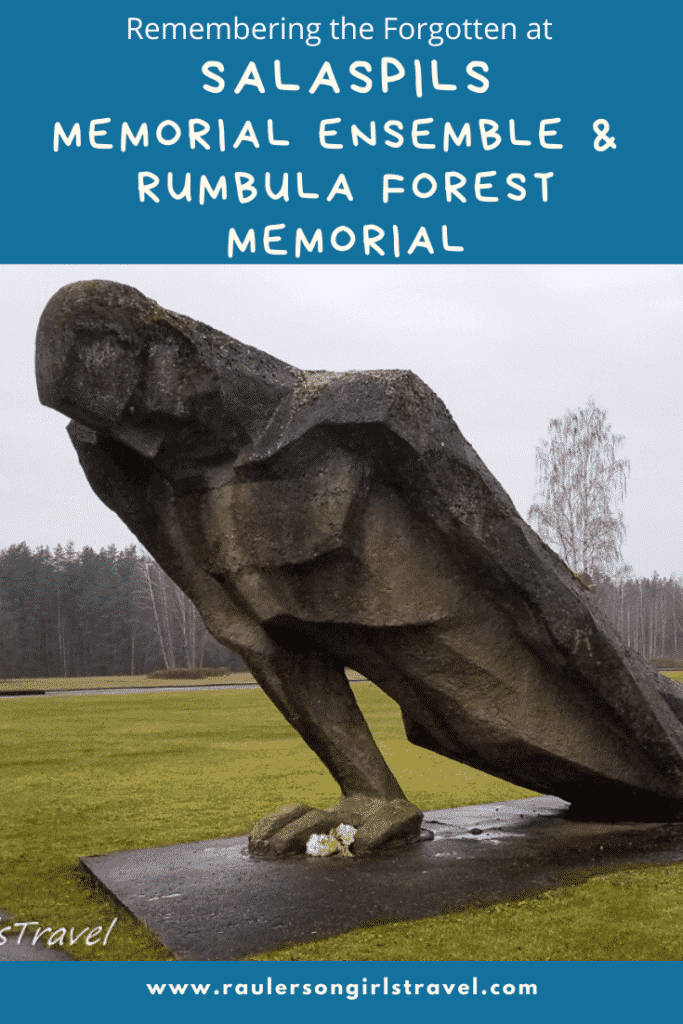 If you are coming to Latvia for a visit, check out these posts for further travel inspiration: